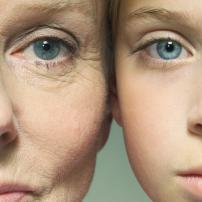 With ageing wrinkles, pigment spots appear on the face, on the neck, the skin will be sallow, thin and its elasticity decreases. The ageing is influenced by sun exposure, smoking and genetic factors. Two types of wrinkles exist: the dynamic or mimic and the static. The dynamic wrinkles are caused by the repeated movement of the mimic muscles and they appear around the eyes, on the glabella and on the front. They may appear already at the age of 30, earlier then the static wrinkles. The nasolabial folds, the Marionette lines and the rhytides in the glabellar region belong to the static wrinkles. The age spots usually appear after the age of 50 on the face, on the neck, on the dorsal surface of the hand. Their number may vary from one to numerous, its diameter is between 2-10 mm, and their color is not influenced by sun exposure.

The mode of action of carbon dioxide fractional laser face resurfacing
The light of the fractional carbon dioxide laser is absorbed in water. The light reaches the skin surface in numerous separated columns removing the old epidermis and dermis. The number of the columns variable between 64-144/cm2, the pulse length can be influenced too. There is a quick recovery of the epidermis from the remaining cells between the columns. The heat effect of laser stimulates the dermal fibroblast to produce large amount of collagen end elastic fibers. The skin will be more tight and flexible.

You have to follow the followings before the fractional carbon dioxide laser face resurfacing
You have to take pills against herpes labialis, you have to avoid sun and solarium exposure in the 2 weeks before the treatment.

How is made the fractional carbon dioxide laser face resurfacing?
We use anesthetic cream for 45 minutes and you will feel only slight pain during the treatment. The treatment time is about 60 minutes.

You have to do the followings after the fractional carbon dioxide laser face resurfacing
After the treatment there is no wound, the skin will be swollen and red and some punctuated bleeding points can bee seen. The swelling and the punctuated bleeding points will disappear usually in one day and the redness will disappear usually in one week. You will experience peeling between 5 and 7 days. During the recovery period you have to apply a special cream but there is no need to wear a bandage. Sunscreen using with at least 30 SPF for at least 3 months to prevent the brown discoloration is mandatory. You have to keep off from direct sunbathing and especially solarium use for at least 3 months.

How long the effects of the fractional carbon dioxide laser face resurfacing?
The effect will remain for some years depending on your genetic background and it is influenced by your sun exposure or solarium use and your smoking habit.