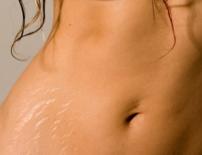 Clinical signs
The stria is the wide red or white lines that are slightly depressed to the surrounding skin. They are formed more frequently on the abdomen, on the hip, on the breasts, on the thigh, and on the shoulders. They frequently appear during pregnancy, in the case of quick weight gain or in weight losing, in the puberty because of the quick skin strain. In that cases when they appear without obvious reason we have to exclude the disease of the adrenal gland. In the stria the collagen and elastic fibers are damaged so the dermis loses flexibility and then it ruptures. At the beginning the stria is red because of dilatetid the vessels in the dermis. With time the color of the stria will be white and there is no brown color after sunbathing.

The mode of action of carbon dioxide fractional laser stria treatment
The light of the fractional carbon dioxide laser is absorbed in water. The light reaches the skin surface in numerous separated columns removing the old epidermis and dermis. The number of the columns variable between 64-144/cm2, the pulse length can be influenced too. There is a quick recovery of the epidermis from the remaining cells between the columns. The heat effect of laser stimulates the dermal fibroblast to produce large amount of collagen end elastic fibers. The skin will be more tight and flexible so the visibility of stria is decreased.

You have to follow the followings before the fractional carbon dioxide laser stria treatment
You have to avoid sun and solarium exposure in the 2 weeks before the treatment.

How is made the fractional carbon dioxide laser stria treatment?
We use anesthetic cream for 45 minutes and you will feel only slight pain during the treatment. The treatment time is about 20-60 minutes depending on the size of the stria.

You have to do the followings after the fractional carbon dioxide laser stria treatment
After the treatment there is no wound, the skin will be swollen and red. The swelling will disappear usually in one day and the redness will disappear usually in one week. You will experience peeling between 5 and 7 days. During the recovery period you have to apply a special cream but there is no need to wear a bandage. Sunscreen using with at least 30 SPF for at least 3 months to prevent the brown discoloration is mandatory. You have to keep off from direct sunbathing and especially solarium use for at least 3 months.