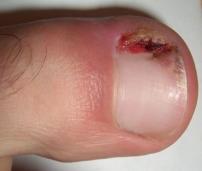 Clinical signs
The ingrown nail most frequently appears on the big toe of the foot. It is caused by more (often simultaneously appearing factors): the too deep cut of the nail plate, wearing a too narrow or ill breathable shoes, poor hygiene, the mechanical injury of the nail plate or the matrix, nail plate dystrophy, onychomycosis, diabetes, genetic factors. For the effect of these factors the nail fold presses the lateral nail plate that causes bacterial infection. Inflammation develops in the lateral nail fold that is characterized by redness, swelling, bleeding, and pain. Sometimes there is the formation of a bleeding granulation tissue that increases the pain and makes odorous the foot.

You have to do the followings after the carbon dioxide laser removal of the ingrown nail
After the operation there will be serous discharge. You have to remain in rest for 2 days, and then you can walk in comfortable shoes. The healing time is usually between 10 and 14 days depending on the severity of the inflammation before the operation. You have to wear a bandage during the healing time.

In some cases the ingrown nail operation by carbon dioxide laser is contraindicated
Unreal patient expectations, untreated diabetes, stenosis of arteria in the leg, elderly patient.