Mole or melanoma screening with dermoscopy 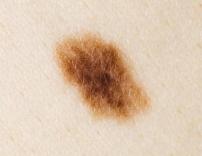 Why necessary the mole screening with dermoscopy?
Because of the thinning of the ozone layer, the solarium use and the sunbathing without sunscreens increase the frequency of malignant melanoma which is the most malignant skin tumor. The pigmented moles are risk for the development of malignant melanoma because 30 percent of melanoma arises form this type of nevus. There are 3 types of pigmented nevi: congenital, acquired, and dysplastic. The UV radiation and the genetic factors are the main factors in the development of pigmented nevi and melanoma too. The melanoma is the cancer of the pigment cells of the epidermis. Its emergence and spreading is quick and aggressive. It occurs mainly between 40-50 years but it can occur more and more often in younger people. Its frequency is equal in women and man. It can be seen most frequently in woman on the extremities and in man on the trunk.

The dermoscopy is suitable for the followings
The dermoscop is a special hand glass with tenfold magnification. The use of dermoscop makes possible a high precision diagnosis. Using the dermoscop we can decide whether the nevi are surely benign, surely malignant or emerge the possibility of malignancy.

We use the dermoscopy on the following way

At whom and when the dermoscopy can be done?
The dermoscopy is a painless and harmless investigation. It can be done in infant and in pregnant woman too. The different seasons are important because of different considerations. In spring the goal is the status survey. In autumn, after the sunbathing the goal is the examination of the changes. In winter months when the skin is pale the quality of nevi is easily examined.

The digital dermoscopy is advisable for the following people

What about the frequency of the dermoscopy?
In the case of pigmented nevi it is indicated in every year. In the case of dysplastic nevi it is indicated in every 3-6 months. During this time you have to do the self assessment in every 3 months. If you see change in the color or in the shape of the pigmented nevi you have to ask a date for dermoscopy. By this method it can be discovered the dangerous moles or the malignant nevi. It is true for the malignant melanoma too that the early detection can save the life.