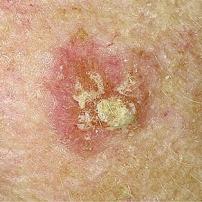 Clinical signs
The lesions are plaques with 3-10 diameters, with reddish color, their surface is scaly, and they are without any complaints. They appear on the chronically sun exposed skin of the face, on the bald head, and on the earlobe. The actinic keratosis is the response of keratinocytes to sun exposure. The first step in the development of actinic keratosis is the damage of keratinocyte DNA which leads to disturbed cell division. It is a precancerous state: after 2-3 years, in 10% of the cases lead to the development of a skin cancer called carcinoma planocellulare.

Therapy
The therapy is necessary to prevent the cancer development. It can be treated with local cytostatic agent, with carbon dioxide laser and with cryotherapy.