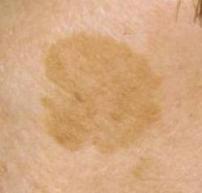 Clinical signs
There are a lot of different kinds of pigmented spots, but we only deal with treatment of age spots. The brown age spots can be seen on the face, on the neck, on the lower arms, on the dorsal side of the hand. The diameter of the age spots are between 2-10 mm, their number show great variaton from one to a numerous, their color are not influenced by the sun exposure. They usually develop from the age of 45-50 years. Beside that they are the sign of the ageing they frequently seen as the sign of the solarium use. The age spots are accompanied by the other signs of the ageing: wrinkles, the skin is sallow, thin and inelastic.

How is made the removal of age spots by carbon dioxide laser?
The operation can be done without local anesthesia because the lesions are very superficial. The time of the operation is between 5-10 minutes depending on the number and the size of the age spots.

You have to do the followings after the carbon dioxide laser removal of age spots
After the operation there will be serous discharge. The healing time is usually between 7 and 10 days depending on the size of the age spots. You have to wear a bandage during the healing time. Sunscreen using with at least 30 SPF for at least 3 months to prevent the brown discoloration is mandatory. You have to keep off from direct sunbathing and especially solarium use for at least 3 months.

In some cases the removal of age spots by carbon dioxide laser is contraindicated
Unreal patient expectations, untreated diabetes.

Operation: we can give the price after the visit because their size and number show great variations