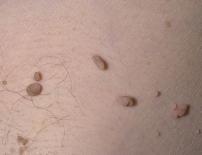 Clinical signs
There are some types of benign moles. Skin tags: soft, skin colored, often pedunculated lesions, their number shows great variations. They can appear anywhere on the body, but it is founded more frequently on the neck, in the axilla, under the breast, in the groin, and on the eyelids. The age and the genetic background play role in their development.
The benign moles are skin colored papules with smooth or punctuated surface. They also can appear anywhere on the body, but especially frequently seen on the face and on the trunk.
Verruca seborrhoica mainly appears on the back, but it appears on the face too, sometimes they can be seen in great number. They are flat papules with variable diameter, they are brown, and their surface may be friable or keratotic. They usually appear after the age of 45-50 years.

How is made the removal of benign moles by carbon dioxide laser?
The operation can be done with local anesthesia using lidocain injection except in the case of small lesions. The time of the operation is between 5-30 minutes depending on the number and the size of the benign moles.

You have to do the followings after the carbon dioxide laser removal of benign moles
After the operation there will be serous discharge. The healing time is usually between 7 and 10 days depending on the location and the size of the benign moles. You have to wear a bandage during the healing time. You can do your work after the operation. Sunscreen using with at least 30 SPF for at least 3 months to prevent the brown discoloration is mandatory. You have to keep off from direct sunbathing and especially solarium use for at least 3 months.

In some cases the removal of benign moles by carbon dioxide laser is contraindicated
Unreal patient expectations, untreated diabetes, if the patient can not avoid sunbathing.