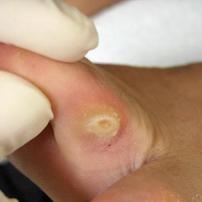 Clinical signs
The corn is one of the most frequent lesion of the foot. It usually appears in elderly, mainly in woman. The corn is the thickening of the stratum corneum. The corn it is caused by permanent pressure and it saves the bones from pressure and rubbing. The corn is ending in a cone shaped horn tap that press the pain receptors in the dermis and in the periosteum and it causes serious pain. There are two types of corn: the hard and the soft. The hard corn is caused by static deviation of the foot arch. It can be seen on the sole of the foot, under the metatarsal bones, on the dorsal surface of the hammer toe, on the end of the toes. It is usually round, slight yellow, its surface is smooth and hard and it rises from the surrounding skin. Sometimes it is hard to differentiate from a wart. The soft corn is caused by the friction of the toes, sometimes it is caused by osselet. It appears most frequently between the 4. and 5. toes.

Therapy
The corn is treated successfully in most of the cases with at your home with corn tapes that are usually containing salicylic acid. In most of the cases the corn is a consequential disease that is the reason that the carbon dioxide laser removal of corn can be definitive only in those cases if you treat the primary cause. For the prevention of the reappearance of the corn you have to wear comfortable shoes, you have to use goose foot insert. In the case of soft corn you have to use ring shaped pillow between the toes. We only make corn removal by carbon dioxide laser if you understand the nature of corn. We make the operation in the following cases: ineffective other treatment modalities, strong pain.

How is made the removal of corn by carbon dioxide laser?
The operation can be done with local anesthesia using lidocain injection. The time of the operation is about 10 minutes.

You have to do the followings after the carbon dioxide laser removal of corn
After the operation there will be serous discharge. You have to remain in rest for 2 days. The healing time is usually between 7 and 14 days. You have to wear a bandage during the healing time.

In some cases the removal of corn by carbon dioxide laser is contraindicated
Unreal patient expectations, untreated diabetes, stenosis of arteria in the leg, elderly patient.