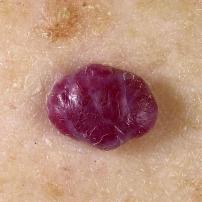 Clinical signs
The hemangioma is a red colored papule that is caused by the proliferation of the small vessels of the skin, their diameter is about some millimeter, they arise from the skin. One of its form is present at the birth, fortunately most of these cases spontaneously absorb. In the adulthood they appear over 40 years on the chest, on the back and on the face. Their appearances are influenced by the age, genetic factors, the sunbathing and the solarium use. In the adulthood they are not absorbed spontaneously.

Treatment
The cause of treatment are esthetic and the bleeding in the case of injury. These are such reasons that need your decision. The hemangioma can be removed by scalpel, by carbon dioxide laser and by electrosurgery.

How is made the removal of hemangioma by carbon dioxide laser?
The operation can be done with local anesthesia using lidocain injection except in the case of small lesions. The time of the operation is between 5-20 minutes depending on the number and the size of the hemangioma.

You have to do the followings after the carbon dioxide laser removal of hemangioma
After the operation there will be serous discharge. The healing time is usually between 7 and 10 days depending on the size of the hemangioma. You have to wear a bandage during the healing time. Sunscreen using with at least 30 SPF for at least 3 months to prevent the brown discoloration is mandatory. You have to keep off from direct sunbathing and especially solarium use for at least 3 months.

In some cases the removal of hemangioma by carbon dioxide laser is contraindicated
Pregnancy, untreated diabetes.

Operation: we can give the price after the visit because their size and number show great variations