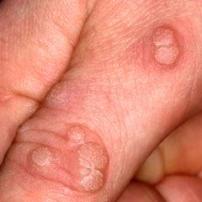 Clinical signs
The warts are caused by different strains of Human Papilloma Virus (HPV) that are replicated only in human epidermis and mucosal surfaces. The warts frequently appear in children who have immature immune system or in immunocompromised adults. The HPV spreads from person to person with direct contact and have long incubation period that lasts from 1-8 months. Sometimes the immune system can eradicate them without any trace. The warts appear most fequently on the hand and on the sole. The lesions are brown or skin colored papules, with hyperkeratotic or stabbed surface, their diameter are usually some millimeter, their number has a large variation. Sometimes the differentiation is hard from a corn. The warts are usually without any complaint on the hand, but on the sole are usually accompanied by pain.
Condyloma acuminatum: this type of wart appears on the mucosa or on the skin of the genitals and around the anus. They are painless, flat or raised, cauliflowerlike, skin colored, soft papules with variable diameter and number. It usually spreads with sexual contact.

Therapy
The therapy is necessary because of several reasons: spreading, esthetic concerns, disturbing at the work if it is on the hand, pain if it is on the sole. The warts can be treated with local therapy using cytostatic agents, salicylic acid or with liquid nitrogen cryotherapy. Surgical possibilities: scrape with Wolkmann spoon, carbon dioxide laser vaporization or electrosurgery. These therapies are accompanied with the administration of immunmodulator drug if there is large number of warts. In the case of Condyloma acuminatum there is vaccination.

How is made the removal of warts by carbon dioxide laser?
The operation can be done with local anesthesia using lidocain injection except in the case of small lesions. The time of the operation is between 5-30 minutes depending on the number and the size of the warts.

You have to do the followings after the carbon dioxide laser removal of warts
After the operation there will be serous discharge. The healing time is usually between 7 and 14 days depending on the location and the size of the warts. You have to wear a bandage during the healing time. You have to remain in rest for 2 days if the operation happened on the sole. You can do your work if the removal happened on your hand. Sunscreen using with at least 30 SPF for at least 3 months to prevent the brown discoloration is mandatory. You have to keep off from direct sunbathing and especially solarium use for at least 3 months.

The followings happen after the removal of warts by carbon dioxide laser
The pink color after the healing is part of the normal healing. It indicates that the healing has completed and it usually resolves in 4 weeks spontaneously. The removal of warts by carbon dioxide laser vaporization is a safe process but you have to follow the written bandage process to prevent the side effects. The side effects are rare and they are the followings: bleeding, pain, inflammation around the wound. Unfortunately there may be recurrence of the warts in some cases and new lesions can appear.

In some cases the removal of warts by carbon dioxide laser is contraindicated
Unreal patient expectations, untreated diabetes, stenosis of arteria in the leg, elderly patient.