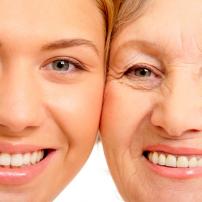 The young skin
The skin is consisted of 3 layers: the epidermis, the dermis, the subcutis. The epidermis is the outermost layer, it is a waterproof, protective wrap over the body's surface which also serves as a barrier to the outside. The keratinocyte is the main cell in the epidermis, it divides in the basal layer of the epidermis. The new cells move to the surface, meanwhile they become thin, lose their water content and at the end they peel as horn. The keratinocytes produce keratin, different lipids. On the skin surface is a hydrolipid layer containing the fluids of the different glands of the skin, and it mainly acts as a barrier.
The fibroblast are the main cells in the dermis, their function is the synthesis of the collagen and elastic fibres and the basal substance of the dermis. The collagen fibres bond water, their amount, quality and arrangement define the flexibility of the skin. The hyaluronic acid is the main molecule of the basal substance, it can bond large amount of water that contributes to the elasticity of f the skin.
The subcutis is composed of adipose tissue and connective tissue bonds. Its task is to attach the skin to the underlying bone and the muscle as well as supplying it with blood vessels and nerves.
The skin of a young man is soft and flexible owing to the epidermis, to the collagen and elastic fibre of the dermis, to the hyaluronic acid and to the subcutaneous adipose tissue.

The ageing of the skin
The skin undergoes a natural ageing process that affects all the 3 layers which is determined by genetic factors. The natural ageing is accelerated by the sun exposure, the solarium use, the smoking, the short sleeping. The epidermis becomes thin, its water content decreases. The amount of collagen and elastic fibres and the hyaluronic acid decreases. The volume of the fat pillows decreases and the connective bonds weakens in the subcutis. The visible signs of ageing begin in another time and with variable speed in every person.

The different signs of ageing usually appear over 40 years

Because of the weakening of supporting structure the skin will be flaccid at the lower eyelid, in the middle and the lower part of the face, on the neck. Two types of wrinkles exist: the dynamic or mimic and the static. The dynamic wrinkles are caused by the repeated movement of muscles and they appear around the eyes, on the glabella and on the front. They may appear already at the age of 30, earlier then the static wrinkles. When they appear in the thirties they are not accompanied by the other signs of the ageing (age spots, shallow and inelastic skin). The nasolabial folds, the Marionette lines and the wrinkles in the glabellar region belong to the static wrinkles. The amount of hyaluronic acid also decreases in the lips that cause rigorous face expression. The age spots usually appear after the age of 50 on the face, on the neck, on the dorsal surface of the hand. Their number may vary from one to numerous, its diameter is between 2-10 mm, and their color is not influenced by sun exposure.